The former Prime Minister H.D. Deve Gowda spoke to the Hindu, a leading newspaper of India,  on the impact of demonetisation and the evolving political situation.

TH: In a recent speech, you compared the Emergency imposed by Indira Gandhi to the current situation following demonetisation…

DG: When banks were nationalised and privy purses abolished, the people thought this major step taken by Indira Gandhi would benefit the poor and solve the unemployment problem… In the 1971 Parliament elections, she won a two-thirds majority; in 1972, after the Assembly elections, almost all the States came under the Congress umbrella; there was virtually no Opposition in the country. People believed in Indira Gandhi’s slogans, garibi hatao, berojgari hatao.

In 1971, she was at her peak. But within just three years, in Nagpur when she went to address a public meeting where she announced the slogan of a curb on consumption, people pounced on her and the police had to escort her out.

TH: What are your objections to the demonetisation decision?

DG: On November 17, I wrote to the Prime Minister, welcoming the move but said it had been done without a proper assessment of the situation. From November 8 to now, several alterations have been made; now the amendments to the Taxation Bill have created confusion. My concern is will these steps yield the expected results? If it does, then Modi will be a great leader. If he can achieve his dreams of a Digital India, cashless economy, within six months, certainly I will bow my head. If this demonetisation succeeds, he will be the unquestioned leader. If it fails, he will be destroyed.

TH: What about the long term impact on the economy?

DG: The GDP is going to go down. The value of the rupee could fluctuate. If within six months things don’t settle down, and digital India is not put in place, the problems will increase. Unemployment will grow — people in the unorgansised sector will be hit.

But there’s no social unrest yet.

No political party has provoked the situation in anyState; only Mamata Banerjee has taken a tough stand in public meetings and has spoken of a financial emergency. She’s a fighter. She has not accumulated any money; she probably has half a dozen khadi saris and is living in the same house as she was when she first entered Parliament. People speak of the Sarada scam, the chit funds in Bengal, but she’s a fighter. The people are with her.

TH: Is it time for a Third Front?

DG: I don’t want to jump to conclusions that there will be a Third Front tomorrow. Circumstances will create the situation … if there is an adverse impact of demonetisation, then the people will put pressure on political parties. People are tolerant. But there will be a limit to their patience.

TH: Who could be the leader of a possible Third Front?

DG: Circumstances will force a name. Who am I? In 1996, I was forced to weep on that day before the 13 parties: ‘Leave me, I am on the gaddi of Chief Minister for 18 months; I told Jyoti Basu you have been Chief Minister for 18 years; you become Prime Minister. He agreed but his party was divided. 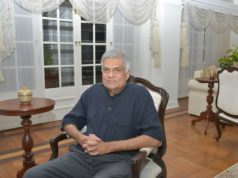 India, China, Japan must work together for economic cooperation in Asia