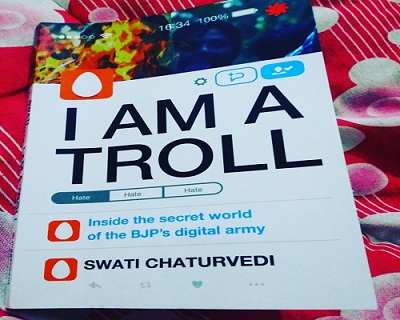 Social media in India is awash with right-wing trolls who incite online communal tension and abuse and sexually harass journalists, opposition politicians and anyone who questions them. But who are they? Why do they? What they do? And how are they organized?

In this explosive investigation conducted over two years by Swati Chaturvedi finally lifts the veil over this murky subject. The kind of online trolls that we need to be wary of - the right-wing trolls. They are dangerous. They are sexists and misogynists. They are obsessed. In India, at present, social media is overflowing with right-wing trolls, whose full-time job (sic) is to spread hate, incite communal tension, and make rape threats to women journalists and politicians, and death threats to politicians from opposition parties, critics and anyone who opposes the government or the party.

They do what they do, not because they love the party they are affiliated to or believe in its ideologies. It is because they have been asked to do so and are paid for it. Trolling is their bread and butter.

We are all aware of the political climate in the country, where voices of dissent are simply not tolerated and suppressed immediately by using forceful means. The present BJP-led government at the Centre just cannot accept criticism or counter it with facts.

With social media emerging as a powerful medium to access and exchange information at the blink of an eye, the BJP was quick enough to realize its potential and use it to its advantage and continues to capitalize on it. And that is exactly what journalist Swati Chaturvedi explores in her book I Am a Troll: Inside the Secret World of the BJP’s Digital Army.

As the author has pointed out, no other major political party or its prominent members have such an influencing online presence. But instead of using social media as a tool to spread awareness of policies, welfare measures and growth rate, the government is busy spreading hateful rhetoric with the help of its army of trolls.

Having been a victim of such vicious trolling and online abuse herself, Chaturvedi has made painstaking efforts to delve deep into the world of these online trolls and find out who they are and what their modus operandi is.

For every hashtag that trends, there is a story. There is an organized campaign behind every communal issue that flares up overnight. The revelations or rather confessions of an ex-volunteer, Sadhavi Khosla, the only one who is on record, give a deeper insight into the digital network and malicious campaigns of the BJP. Her experiences with the social media cell of the BJP tell us how the virtual hate often spilled into the real world and triggered violence while the government remained a mute spectator. Several other trolls, albeit anonymously have spilled the beans on the BJP’s social media unit.

Chaturvedi has patiently observed the trolls and studied their online behavior. She has carefully culled out the data to show how such hate-mongering is orchestrated by the BJP, with the blessings of none other than the Prime Minister himself.

The author has also focused on the bright side, and has written about the BJP ministers who use the medium to help people and guide them with the right information, not just spread divisive propaganda. In the two-year long investigation, she has interviewed top politicians, bureaucrats, marketing analysts to provide the readers with specific and concrete details.

The simple language and visual presentations make the book an easy read, even for those who are not familiar with social media. I Am a Troll: Inside the Secret World of the BJP’s Digital Army may not make for an exemplary work of literature but it is an essential read.

I Am a Troll: Inside the Secret World of the BJP’s Digital Army

The Jinnahs, Gandhi And Khilafat