The Government has decided to call for a referendum with the support of the Sri Lanka Freedom Party to pass a new Constitution once the draft is completed.

Minister of Higher Education and Highways and Leader of the House Lakshman Kiriella, responding to a question raised by Joint Opposition lawmaker Wimal Weerawansa, said: â€œGovernment has cleared its position. A new Constitution will be brought in and a referendum will be held. No efforts will be taken to move a Constitution behind closed doors.â€

However, MP Weerawansa said that the proposed Constitution includes a federal system catering to the needs of separatist forces. (AH) 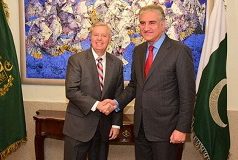 Organised since its inception in 1970 till today by Dr Klaus Schwab, the World Economic Forum is unique annual forum at Davos created by this unique man to discuss with world leaders of government, economy, technology, politics, media and culture how globalization is creating global problems and threats that exceed the management abilities of national governments. Around 3,000 participants drawn from across the world from every sphere of influence: business,... More

By reaching out to Taliban, Iran makes presence felt in Afghanistan...

The very nature of the conflict in Afghanistan has made it almost impossible for the neighbouring countries to remain aloof from it or maintain some distance, even a calculated one. For one thing, the conflict is no longer just between the US and Taliban or the US and al-Qaeda. The ISIS, known as IS-K in Afghanistan, has established its presence, which has forced many countries—Russia, China and Iran—to change... More

The sorry state of Pakistan’s police

The imperial form of police infrastructure that Pakistan inherited was deliberately created to serve the British rulers rather than promote harmony, security and adherence to the law. The 1861 Police Act has never changed except for minor amendments. Even the new laws introduced by the provinces retain more or less the essence of the original imperial law. The persisting culture is to ensure that the weak remain subservient to... More

An Australian outfit, Centre for Peace and Economic Studies (CPES), has stated that Bangladesh has gone up four positions in the global terrorism index, according to it’s ranking. Several other countries in South Asia have gone down in terms of vulnerability, including Pakistan and India. Nepal, Bhutan and Sri Lanka have also improved their standings in this index. CPES has reported that introduction of modern education in madrassas, investment in... More

How the Taliban have become leading actor in Afghan peace talks

While the Taliban have established their domination both politically and militarily in almost half of Afghanistan, the consequent talks with the US and the way they have progressed show that they are already in a commanding position. They certainly have become the leading actor in these talks not just because they are the ones fighting the war against the US and Afghan forces, but also because they are directing... More