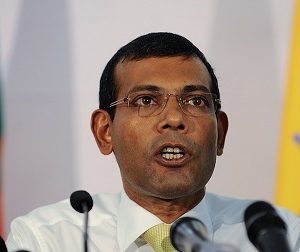 Exiled Maldivian leader Mohamed Nasheed said on Thursday he would return to the troubled Indian Ocean archipelago to contest a 2018 presidential election and called for international pressure on the government to allow him to run.

The Indian Ocean island nation has been mired in political unrest since Nasheed, its first democratically elected leader, was ousted in 2012. He was later sentenced to 13 years in jail on terrorism charges after a widely denounced trial.

Nasheed, who had been released to go to Britain for medical treatment, said the United Nations Working Group on Arbitrary Detention (UNWGAD) had ruled that his detention was unlawful and politically motivated, allowing him to contest any elections.

Nasheed has to get his sentence for the alleged abduction of a judge in 2011 revoked to be eligible to contest the poll as election laws bar candidacy of those jailed for more than a year for a criminal offence, for three years.

Nasheed, 49, hopes the government will let him contest the 2018 polls in which President Abdullah Yameen is expected to seek re-election for a second five-year term.

In its September 2015 ruling, UNWGAD urged Yameen’s government to take the necessary steps to release Nasheed immediately and accord him an enforceable right to compensation. However, Yameen did not adhere to the rulings.

Nasheed urged the international community to engage more robustly with Yameen’s government and said a number of countries were working behind the scenes.

“We will continue to work with our international partners to see how they may be able to impress up on President Yameen the need to have an all inclusive elections,” he said.

The Maldives left the Commonwealth in October, weeks after the organisation warned the tropical island nation, famous for its beaches and coral reefs, could be suspended because of its lack of progress in promoting the rule of law and democracy.

The opposition alleges the administration is trying to cover up corruption including money laundering, accusations the government has denied.

The largely Muslim island chain with a population of 400,000 has other looming problems that belie its reputation as a tourist paradise.