As Delhi and Colombo intensify their high-level political engagement, new opportunities for elevating the partnership are coloured by enduring suspicions in Sri Lanka. The country’s prime minister, Ranil Wickremesinghe, is travelling to India this week and Prime Minister Narendra Modi will head to Sri Lanka next month to join the special international celebrations of the Buddha Jayanti in Colombo.

For Modi, it will be the second visit to Sri Lanka in barely two years and it reflects his determination to overcome the unfortunate legacy of three difficult decades that saw a cruel civil war, India’s failed intervention and the accumulated distrust of Delhi in Colombo. This is not the moment to delve into those difficult decades, but Modi was dealt an impossible hand on India’s Sri Lanka account. A strong political mandate in the 2014 elections and a pragmatic approach to foreign policy, however, gave Modi some room to push for a restructuring of ties with Sri Lanka.

India’s new possibilities have been highlighted by media reports from Sri Lanka, that Wickremesinghe is bringing proposals for the development of the Trincomalee area as a regional hydrocarbon hub in the Bay of Bengal and the eastern Indian Ocean. These proposals include the construction of a new LNG terminal and the renewal of the Second World War-era oil tank farms in Trincomalee in partnership with India.

That these ideas provide a neat fit between India’s massive consumption of hydrocarbons and Sri Lanka’s location atop the Indian Ocean sea lines of communication is hardly in doubt. Yet, the resistance in Sri Lanka to economic cooperation with India remains entrenched. Protesting the modernisation of the Trincomalee oil tank farms, the workers of the Ceylon Petroleum Corporation have announced a strike this week. Deep political reservations in Sri Lanka, in fact, held up the implementation of a 2003 agreement with India on the development of tank farms.

The twists and turns in this story are part of a familiar but unfortunate South Asian pattern — the politicisation of economic projects. Our neighbours in East Asia, for example, have learnt to separate political differences from mutually beneficial economic engagement. China and Taiwan don’t even recognise each other’s political legitimacy, but that has not stopped them from productive commercial cooperation.

But, in the Subcontinent, we have overloaded even the simplest trans-border economic questions with ideological arguments and conspiracy theories.

A new factor has now begun to animate the default negative discourse in South Asia — the idea of an all-encompassing Sino-Indian rivalry for regional influence. Most recent reports on a potential Indo-Lankan partnership for the development of Trincomalee present it as part of Colombo’s balancing act between Delhi and Beijing. Since Sri Lanka has given port projects in Colombo and Hambantota to China, the story goes, it is now trying to compensate an unhappy India with infrastructure projects elsewhere in the emerald island.

That China is a major economic partner for Colombo and other regional capitals can’t be a surprise. After all, China is now the world’s second largest economy. Beijing has encouraged its companies to embark on a “go out” strategy and has infrastructure projects underway all across the world.

The puzzling proposition, however, is some thing else. How come Delhi, despite its size and proximity, has to “compete with Beijing” in the Subcontinent? India should have been the preferred economic partner to all of its neighbours, but it is not. These questions are rarely asked. One part of the damning answer is that India had checked out of the business of regional integration after Independence.

Those arguing today that India is isolated in the region are loath to admit that Delhi deliberately chose to discard economic regionalism — in the name of self-reliance. While Delhi held onto the inherited political claims of the Raj for an exclusive sphere of influence in the Subcontinent and the Indian Ocean, it abandoned the economic foundations of that claim — integrated regional markets. In the reform era that began at the turn of the 1990s, Delhi has surely tried to undo the damage. But the effort was too weak to overcome the political burdens that weighed down India’s neighbourhood policy. Unfortunately for India, it also coincided with China’s rise and the dramatic expansion of its regional commercial influence.

You might blame China for many things, but not for India’s much-delayed regionalist epiphany. Delhi’s current challenge is not about undoing Beijing’s new economic weight in the region. It is about building on its own natural geo-economic advantages in the region.

That is precisely what the Modi government has been trying to do in the last three years. Modi’s “Neighbourhood First” policy is in essence about promoting regional economic integration. Sustained diplomacy has begun to pay off with Bangladesh. Recall the multiple agreements on trans-border connectivity and

infrastructure development announced during the recent visit of the Bangladesh Prime Minister Sheikh Hasina. Delhi might need lots of patience, much hard work and a bit of luck to produce similar economic advances with Colombo. One thing though is certain: Our PM will persist with the neighbours.

The writer is director, Carnegie India, Delhi and a contributing editor on foreign affairs for ‘The Indian Express’ 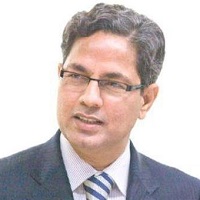