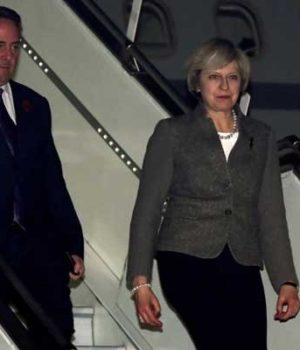 British Prime Minister Theresa May arrived in Delhi on 6 November evening on a three-day India visit. This is her first bilateral engagement outside Europe since taking office in July.

The 60-year-old leader’s visit is aimed at enhancing Indo-UK ties in the key areas such as trade, investment, defence and security. Ms May is being accompanied by 40 business delegates from UK companies which will showcase itself at the Tech Summit in Delhi.

But this pitch by Britain is at a time the pound has fallen by nearly 20 per cent, the economy has taken a huge hit and jobs could be lost in London post Brexit - UK’s exit from the European Union.

Ms May on first day will hold talks with Prime Minister Narendra Modi, who will host her for lunch post the Tech Summit.

British PM’s three-day visit comes in the backdrop of the historic June referendum favouring Brexit and as part of the new May-led government to step up engagement with countries outside the 28-nation European Union.