India’s foreign debt is the highest among the South Asian countries. Currently, rest of the south Asian countries combinedly have around 31 percent external debt of what India have. Pakistan and Sri Lanka is 2nd and 3rd after India by a huge margin.  The foreign debt per capita is the highest for Maldives. Sri Lanka and Bhutan places after Maldives.

According to Wikipedia and other sources, India has a total of 485.60 billion dollars (at the beginning of 2016) in foreign debt. Whereas total foreign debt for other South Asian countries is around 150 billion USD. Despite the country’s huge debt, because of the high population foreign debt per capita for India 388 USD.  Despite a relatively low income per capita Huge spending in defense and infrastructure development sectors and large-scale loan based investment is causing the increasing amount of foreign debt liability. Pakistan has the second highest external debt of 64 billion dollars (at the beginning of 2016) and this amounts for $366 foreign debt per capita.

In South Asia, Sri Lanka ranks No. 3 in total loans. At the end of 2011, their foreign debt was 64 billion dollars, they, however, converted some of the large-scale loans to equity which decreased the net loan amount to 46 billion USD. Still, they have the second highest per capital debt in south Asia amounting 2197 USD per head.  Every year, 90 percent of the country’s revenue goes to meet foreign debt obligations. Every year their debt is increasing. Next country subject to rapidly increasing foreign debt is Bangladesh. According to the latest estimates, the country’s foreign liabilities of $ 25.96 billion. Their debt per capita is 149 US dollars. Bangladesh is expected to come out from the list of least developed countries. At the same time, commercial loans are increasing in place of the concessional loans. As a result, with the little increase in the country’s foreign debt, interest to those loans are increasing in much faster rate.

Myanmar and Nepal are in a quite comfortable place in terms of foreign debt liabilities. Myanmar’s total foreign debt is $ 5.45 billion (in 2013). As per capita, which stood at just 117 dollars. On the other hand, Nepal has a total debt of $ 3.77 billion. As this loan of US, $ 136 per capita suggests address. As per capita, the debt stands at the US $ 136.

Afghanistan is the most ill-fated country in South Asia. For more than three decades of war and violence across the country almost destroyed its economy, but foreign debt liability of the country is lower than one would imagine compared to other amounting 1.28 billion (at the beginning of 2015). However, due to lack of the country’s ability to pay the debt back, they mostly receive charity or grant. Hence Afghanistan’s per capita foreign liability is lowest in South Asia, around 42 USD. Bhutan has almost the same amount of foreign debt, but due to them having small population their per capita foreign debt is 3rd highest in the region, 1747 USD. Island state

Maldives has the highest per capita foreign debt of 2947. Maldives, geographically the most vulnerable country to climate change, has 1.15 billion dollar foreign liabilities. Foreign debt is steadily increasing for this island country. Everyone in a while they try to reduce this debt by leasing some of their islands to the third party. However, it increases again with various development projects. OBOR: A vision as smooth as silk 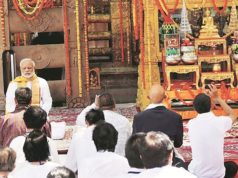 Buddhism being used as foreign policy plank by India, China, Sri Lanka and even Pakistan