The 14th Dalai Lama, reigning since 22 February 1940, has selected his own reincarnation. This happened secretly on July 13 in Diskit monastery of Ladakh, sources familiar with the internationally sensitive matter have revealed. The Dalai Lama arrived in Ladakh on July 3.

The 15th Dalai Lama is a young Tibetan boy, three or four years old, whose parents hold refugee status in India. They will now apply for Indian citizenship and also later likely to receive US citizenship.

The main purpose of the 14th Dalai Lama’s Ladakh visit was to “select” his own reincarnation, the 15th Dalai Lama. Between July 4-12 the Dalai Lama met in private with several groups of Ladakhis in his quarters at the ShiwatselPhodrang to set in motion the process of selecting his successor.

The Dalai Lama, the sources confided, performed a dough ball divination ritual. This is the most important ritual mandatory for selection of very highly placed lamas, including the selection of the Dalai Lama himself, the supreme deity for the Tibetans. According to a Tibetan website, the Doughball Divination is practiced mainly in the monasteries or by individual lamas when an important decision needs to be made, such as in the search for the reincarnation of very high lamas.

A number of possible answers to the enquiry, such as the names of likely candidates for a reincarnation, are written on slips of paper. These are then encased in equal sized balls of dough. Great care is taken to weigh the doughballs to ensure that they are exactly the same size. The doughballs are then placed in a bowl, which is carefully sealed and placed in front of a sacred object, such as the Jowo statue in the main temple in Lhasa, images of dharma protectors or the funerary monuments of great lamas, requesting their inspiration in deciding the outcome. For a period of three days monks remain in the temple reciting prayers day and night.

During that time no one is allowed to touch the bowl. On the fourth day, before all those present the cover of the bowl is removed. A prominent lama rolls the doughballs round in the bowl before the sacred object until one of them falls out. That is the ball containing the answer.The entire event of the “selection” process of the 15th Dalai Lama was recorded on camera, witnessed and spoken in both Tibetan and English.

No public announcement of the selection of the 15th Dalai Lama will be made till an appropriate time. Otherwise, it would raise questions about why the Tibetans are doing this now if the Dalai Lama is in good health and going to live for another 15 years as claimed by ardent followers of the 14th Dalai Lama.

The videotape of the selection process of the 15th Dalai Lama is being kept ready to be shown at a time the 14th Dalai Lama deems fit or is meant to be released after the present Dalai Lama’s death. The Tibetans, under the leadership of the Dalai Lama, have also made some videos that could later be released to the media showing the close bond between the 14th and the 15th to try and counteract the inevitable Chinese opposition to the move.

The obvious question at the moment is what necessitates the selection of the 15th Dalai Lama when the 14th is still alive? According to sources, the time to pick a successor assumes significance in the backdrop of reports that the 14th Dalai Lama is a terminal-stage patient of prostate cancer. This has been denied by the Central Tibetan Administration (CTA).

Incidentally, the news of the Dalai Lama’s reincarnation is now starting to emerge through the exile leadership’s back channels as the call for the Dalai Lama to recognise his successor before his own death has been gaining momentum. The first sign of this came up with an opinion piece in the Tibetan Journal calling for a “pre-emptive emanation”.

The article says, “It is imperative that His Holiness the Dalai Lama should reincarnate within his lifetime at a place of his choosing…Therefore, a symbolic eternal presence of HH without any gap between reincarnations is crucial. And better still, if we get to see the HHDL15 when HHDL14 is still around.”

Interestingly, thearticle explains why such an exercise is an imperative to foil inevitable Chinese manoeuvres. The reason explaining the importance of the selection of the 15th Dalai Lama during the lifetime of the 14th Dalai Lama is given succinctly in the article, according to which “Manifestation of such an emanation would be a knock-out blow to China and a lifeline to the relevance of the Tibetan cause.”

Though the Dalai Lama has hinted at this possibility before, this is the first time ever that there’s been a public call for it. Thus, it’s a well-choreographed move by the Tibetans to encourage the 14th Dalai Lama to choose his successor—which he has done quietly.

The writer is a strategic analyst and columnist who tweets @Kishkindha. 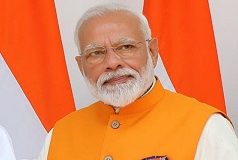 India laments loss of preferential access to US market